TAM offers its members a broad range of training moments for any level of tennis. Our park has 12 smashcourt fields of which 8 change into an indoor court during the winter. Therefore, TAM offers training moments during the whole year except for the holidays. Every single member of TAM has the possibility to train two times a week. Besides that, it is possible to make a reservation on a field without any cost, since every member of TAM has to be a member of the ACLO. The ACLO is an overarching organ for all student sports clubs located in Groningen. For more information, you can also check www.aclosport.nl.

Since a couple of years Tennisclub Albertus Magnus is the best performing student tennis association of the Netherlands. In 2010, for the first time in the history of Dutch student tennis, TAM was allowed to play in the second best amateur league of the country (called the ‘eerste klasse gemengd’). After courageous fighting the team unfortunately relegated by a few points. Nevertheless, the dream has never been abandoned. In 2014, after a lot of hard work and devotion, the second best amateur league was reached again.

To ensure that our fun-based student tennis association can consolidate this high level of tennis, TAM deems it necessary to invest in the fitness of the players. Since a few years, TAM has had a so-called ‘selection plan’, which concerns our players of the four best mixed teams on Sunday. The goal is to get TAM 1 to compete in the top amateur league and to fight a worthy battle. In addition to that, our goals is to form a solid foundation underneath this. This is called the TAM pyramid and would preferably be consecutive teams and league combinations.

Click on one of the headings to learn more about our top tier teams and the facilities TAM offers to the players of these teams. You can also take a look on www.tennisenstuderen.nl. Unfortunately, this website is currently only in Dutch.

If you have become interested in playing tennis at TAM, please register via the information section and then ‘become a member’. If you need more information you can contact the motivator of the board. (*hyperlink van motivator*).

For every member of our top tier player squad, TAM offers the possibility to train three times a week during the year. On Tuesday the training is provided by Paul van Lier and on Thursday the training is provided by Frank Schmitz. Frank has been actively involved with TAM for several years. As a result, Frank Schmitz knows the players to the core, so that he can offer tailor-made training. Paul van Lier trained the selection players for the first time in 2017-2018. The other training is given by Olivier ‘t Hart. An enthusiastic young trainer. In addition to that, TAM makes it possible for the top tier players to follow match training every week on Sunday from 4 p.m. to 6 p.m. Consequently, the competition / tournament level is maintained throughout the year. During the last 2 to 3 months before the competition kicks off, fitness and coordination training will also be added.

Because TAM plays on such a high level we are eligible to claim the Higher Competition Sports Subsidy. With this subsidy TAM can offer its players a wide range of facilities:

Exchange & top tier players weekend
In order to start the competition optimally, exchanges are also arranged for our top tier teams against different associations with similarly skilled teams. Thereby, a top tier player weekend is organized since 2007. During this weekend our top tier players and the board will set off together. Attention is paid to aspects like coaching and group process / team building. 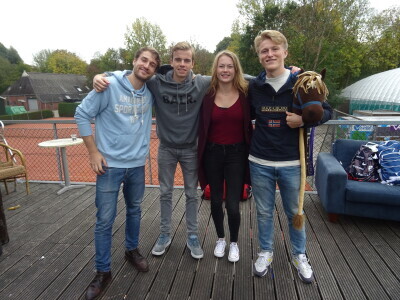 Workshop
A workshop is organized once or twice a year for the top tier players.  For example, this can be a coaching or teambuilding workshop.

Fitness
In addition to coaching and training, TAM also invests in the physical condition of the players. Hence, the players must work out in the gym at least three times a month. This is made possible by a private fitness center called Construction, with which TAM has been able to sign a contract. For more information about Construction, click here. **here** is hyperlink naar Construction.

The top tier players may make use of the facilities offered by Construction for free. The concerned players receive a pass which they can use twice a week. In addition, a special fitness program for tennis players is offered as a preparation for the competition and tournament season.

Often people work out in groups. However, you are free to determine your own time and schedule. Construction has both a large cardio and a large fitness area. For example, you can use 25 cardio machines and 22 fitness machines spread over two locations in the city.

TC BOO stands for There Can Be Only One, which is the name of our highest playing team on Sunday. TC BOO brings TAM to a lonely height and this is something that we as a association can be very proud of. We would like to thank the players, but also the fanatical supporters for their efforts. On to another fantastic competition!

Every competition day has a report written by different people. It is a look at the competition of TC BOO and how they performed. Here you can find the reports of every league game of recent years. Unfortunately, it’s all in Dutch for now.

TAM 1 played in the top tier of amateur tennis last year. After seven superb days they could not stay in this league. They relegated by just one point. Hence, TAM 1 will play in the second best amateur league of The Netherlands this year.

TAM 2 will play in the third highest amateur league again. With a young team they will try to compete for the top spots.

TAM 3 will play in the fourth highest amateur leaugue. Last year, they came a few points short to get a promotion. Who knows what will happen in 2020?

TAM 4 became the champion last year and therefore got a promotion to the fourth highest amateur league, the same league as TAM 3.